Lupang by Clara Balaguer (Philippines) and Carlos Casas (Spain) is an eight-screen installation that portrays the life of the Ayta people who are thought to be the earliest inhabitants of the Philippines. The Ayta were displaced from their ancestral lands by the 1991 eruption of the Mount Pinatubo volcano located in Luzon. 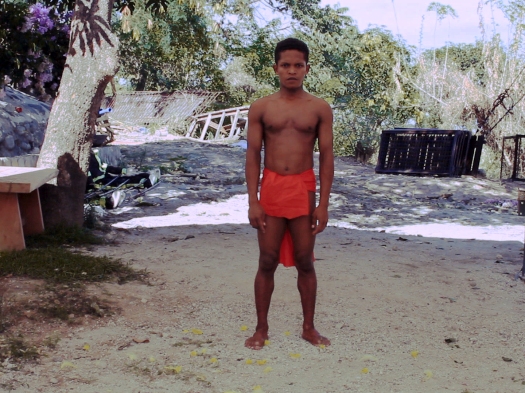 The artists collaborated on this project with the intention to develop, along with the Ayta people, a better understanding of the causes behind the eruption and possible solutions to its aftermath. The video installation presents scenes of everyday life in Ayta communities who relocated to the highlands and the lowlands. The former is shown in Lupang screens 1-4 by Carlos, the latter, in screens 5-8 by Clara.

The non-narrative installation draws some of its inspiration from Udlot-Udlot, a 1975 musical composition by Filipino composer and ethnomusicologist José Maceda. The musical piece is meant to be performed by an ensemble that can range from dozens to thousands of non-trained musicians playing different types of traditional musical instruments.

The artists believe in the integration of social responsibility into the practice of art, and the intention was to create something that could be a source of stability and empowerment for Ayta participants. The overall project seeks to help the Ayta revisit and analyze their identity under their new surroundings and circumstances.

What did you learn from your interaction with the Earth scientists?
CB: The images of seismographic activity were a determining factor for my video editing. The landscape images created with the LIDAR scanner and the microscopic imagery of eruption rock samples played an important part in Carlos’ artistic exploration.

What Earth science ideas inspired your artwork?
CB: Getting to see and know the human side of Earth sciences was interesting. We got to observe the personalities, particularities, emotional patterns, frustrations and prides of scientists at work. This in itself is a rather rare opportunity. It was enlightening to discover that disaster risk management—a practice largely related to managing people before, during, and after disasters—was considered an important specialty within the Earth sciences.

Is this artwork likely to inspire people?
CB: We see this residency as an attempt to bridge the gap between polarized positions and find a balanced truth in both sides of the argument. Science is powerful, but not infallible. Spirituality, art, religion, or poetry are necessary, but not sufficient on their own for us to fully understand our world. The EOS artist residencies seem to strive towards the connection of these two ways to explain the universe. In times of fundamentalist strife such as ours, the call for an inclusive way of looking at things is possibly the most meaningful approach towards peace.

Does your artistic work provide a better understanding of Earth?
CB: Difficult question. Perhaps a quote from Henry Ward Beecher (1813-1187) would suffice: “The blossom cannot tell what becomes of its odour, and no man can tell what becomes of his influence and example, that roll away from him and go beyond his ken on their perilous mission.”

Do you now understand more about the Ayta culture and their relation to nature?
CB: It is difficult to say how much we understand of Ayta culture after only a few months with them. Their relationship with nature seems simple enough to understand. Though we surely lack many details on the intricacies of their animistic beliefs, we can say that the Ayta way with nature is one of utmost respect and care for everything that their god has generously put on land for their survival.

What is perhaps more tedious to unravel is the Ayta way in relation to human nature. It is interpersonal relationships, especially with outsiders, that have enveloped their deep connection with the Earth, the historical source of their prosperity, in static noise. The tribe’s ancestral domains are being poached by developers, agriculturists, the government and tourism investors. Lack of knowledge on legal proceedings makes it difficult for the Aytas to exert authority over their rightful land.

Greed, destitution, or simple pragmatism drives many of them to illegally sell what land they legally possess to non-tribe members. Racism breeds in many Aytas a sense of inadequacy, and in non-Aytas it instills a sense of entitlement. This all complicates the fight to maintain the tribe’s dominion over their land, which is the direct source of their traditions, health, pride and economic independence.

Clara Balaguer is an artist based in the Philippines, where she has lived most of her life. She has held different appointments in the various industries, including the advertising, publishing, and television industries. Clara is currently the director of The Office of Culture & Design, as well as the owner and publisher at Hardworking, Goodlooking Studio. Over the years, she has also taken on various roles such as artist, exhibitor, producer, director, and speaker for various projects, exhibitions, and conferences.
officeocd.com

Carlos Casas is a filmmaker and visual artist whose works marry documentary film, cinema and contemporary visual art genres. His recent works have won awards in film festivals, and he has also exhibited extensively in several countries including Berlin, Venice, and Torino. Carlos is interested in presenting his works through the lens of his experience of the world, and to create works that focus on the human condition.
carloscasas.net