The Knowledge Capsules are outreach and communication videos that introduce snippets of Earth science research to mainstream audiences. These innovative shorts are the result of an interdisciplinary development and production process, and they take viewers on a journey into different aspects of Earth science and natural hazards. The videos include a combination of interviews, visualizations of scientific research, and documentation of fieldwork. They encapsulate research and insights about volcanoes, tsunamis, and climate change in Southeast Asia.

The Hidden Meteorite (in production)

A large meteorite crashed in Southeast Asia (SEA) 800,000 years ago. The impact created a huge field of debris, known as the Australasian tektite strewn field, that extends from SEA all the way to south Australia. For centuries scientists have tried to find the exact location of the impact, but so far no crater has been found. The Hidden Meteorite features the scientific method and the myriad scientific techniques used to locate the possible location of the impact and the likely reason why it had not been found before.

Watch small basalt samples being melted by a Laser beam at the WiscAr Geochronology Lab: 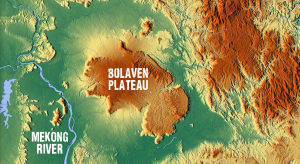 The Bolaven Plateau is near the Mekong River in southern Laos,
right next to where the Hồ Chí Minh trail used to be. 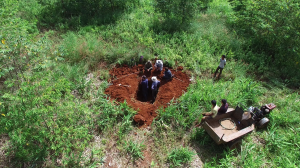 Scientists digging a trench in search of tektites, a common
evidence of a possible nearby meteorite impact.

A behind-the-scenes look at the making of this film was presented at the Asia Oceania Geosciences Society (AOGS) 2019 Conference in Singapore. This film is the result of an international collaboration between several institutions and individuals featured in the film. 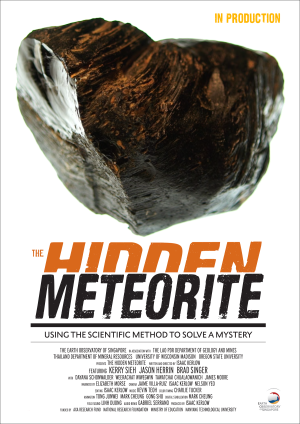 Pre-release poster for the film.

The Hidden Meteorite
A documentary feature film by Isaac Kerlow
Produced by the Earth Observatory of Singapore (EOS) in collaboration with University of Wisconsin Madison, and Oregon State University.
Planned Completion Date: On hiatus, possibly 2021.
In English, and a future version with Lao subtitles

Production for The Hidden Meteorite received support from The Earth Observatory of Singapore at NTU, the AXA Research Fund, the National Research Foundation, the Ministry of Education, and private donors.

Southeast Asia is a densely populated region with a few mega-cities located within 300 kilometers of active volcanoes. The volcanic infrasound can be used to detect and measure eruptions as they unfold, and increase the safety of civil aviation. Volcanic Infrasound shows some of the infrasound sensors installed by the Earth Observatory of Singapore in Mac Ritchie Park, a natural reserve in the middle of urban Singapore. The short documentary won an Award of Merit in the Educational Category at the Accolade Global Film Competition in La Jolla, California. During 2017 it was screened at prestigious international scientific events such as the EGU Cinema in Vienna, Austria, and the Goldschmidt Wild Orbit Cinema in Paris, France.

Volcanic Infrasound was premiered at the Raw Science Film Festival in Santa Monica, California, and it won the Award of Merit in the Educational Category at the Accolade Global Film Competition in La Jolla, California.

Unlocking Climate Secrets follows the Marine Geochemistry team in their search for centuries-old coral colonies. They demonstrate how the extraction and analysis of corals and sediments can provide information about Earth’s climate.

A Tale of Two Tsunamis presents Prof. Kerry Sieh explaining the Tsunami Stratigraphy fieldwork performed in a beach along the coastline south of Banda Aceh. Based on exposed riverbed deposits, he traces the history of two tsunamis that took place centuries apart.

Join our star game tester in Kevin Plays Earth Girl 2 as he quickly demonstrates how to play a basic level in the Earth Girl 2 game.

Coastal Hazards features the Coastal Hazards team as they investigate coastal lagoons, coastal barrier systems, and estuaries along the shores of Southeast Asia and the South China Sea.

Earth Girl 2 was tested extensively for usability and comprehension. We partnered with public schools in Banda Aceh and Padang, Indonesia, and we also worked with schools in Singapore including Chatsworth International, DPS International, Geylang Methodist Primary, Presbyterian High School and the Singapore American School.

Forensic Volcano Petrology presents how researchers in the Volcano Petrology team analyze Merapi volcano rocks as an aid to understanding the volcano’s particular magma chambers and eruptions. By examining these volcanic rocks the team is one step closer to unraveling the cause of explosive eruptions.

People-Coral-Mentawai was the first documentary we made at EOS, and it shows in 20 minutes the methods used by scientist Kerry Sieh to develop a timeline of earthquakes in the West Sumatra region. The methodology is based on extracting and interpreting data from corals that have been uplifted during earthquakes, a process that is both laborious and ingenious. This data can be used to better understand the behavior and patterns of earthquakes and tsunamis in SE Asia.

All EOS Knowledge Capsules can be viewed online, and the first season is available on DVD. Download a 12-page PDF brochure of the first set of capsules (2012-2013).

This is how the front of the Knowledge Capsules DVD looks like.